As Yellowhammers and Whitethroat sang, I was surprised and quietly joyous to suddenly find two young fox cubs playing amongst Oxeye Daisies in a field margin, when the noise of my camera alerted them to my presence. I was about eight feet away. I stood still, then slowly knelt down. They emerged, again. Their playful antics with each other and the Oxeye Daisies made me smile and at one point they ventured on to the cut grass where I was able to briefly watch them.

About 10 minutes later another, slightly larger, sibling male fox cub, emerged from the crop. I was totally caught out by his unexpected arrival (so did not film his emergence): but not by his beautiful, rich ochre coated mother who followed shortly afterwards. I felt empathy for this cautious fox, caring for her children’s welfare as I had for mine. When they had finally noticed me, all of the foxes had looked intently at me before running into the safety of their den.

It was a magical, memorable encounter of a fox family and such an exhilarating privilege to have been able to observe wild fox behaviour at such close range.

For much of the year, foxes are difficult to see in the wild. Wildlife cameraman Stephen de Vere describes the struggle he had when filming them, in his film A Diary of the English Countryside. Cubs are born in April. They emerge in late April and are more active during the day which increases our chance of seeing them hunting, playing or simply relaxing in the sun, until August when they start to learn to hunt with their mother.

As I always have the welfare of the wildlife that I am trying to photograph or film in mind, I decided to leave the fox cubs and continue my search for hare (see our Quick Guide ‘Hare or Rabbit ?‘) so that I did not disturb them for long. I had several amazing encounters with hares, but as I walked further along another field margin, a hare emerged from the field about four feet in front of me. I do not know who was more surprised by this unexpected meeting! The next few moments were again magical, as it seemed perfectly happy to run back and forth in front of me and feed. At one point, the hare was almost too close to keep it in focus. The situation began to feel other worldly.

Again, I felt so privileged to be able to observe normal behaviour of this wild mammal at close range. Brown hares tend to live in very exposed habitats, so have to rely on their acute senses and running at speeds of up to 45mph to evade predators. They do not use burrows, but make a small depression in the ground called a ‘form’ among long grass from which this hare may just have emerged. They usually move out to feed in the open at night, so I was very fortunate to be able to see this hare at close range. On a subsequent visit there were no hares at all, but that is the joy of wildlife watching. You never know what is going to happen! Sometimes you may have rare sightings of more than one species and at other times no special sightings at all, apart from the more commons species. It is one of the joys and challenges of wildlife watching. Yet each species is special and unique and may reveal new behaviour. Nature never ceases to amaze me!

Sometimes wildlife behaviour changes so much and they become so relaxed in your presence, it really does feel as though you have slipped into another realm for a while.

Let us know about your unexpected wildlife surprises in your own nearby wild on Twitter or Facebook. We would love to see your photos or footage! 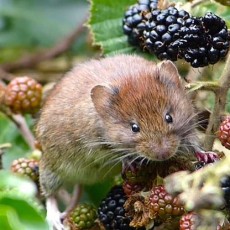 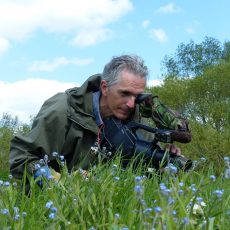 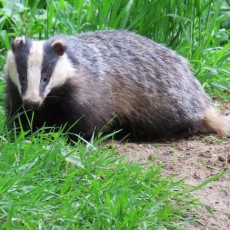 A Passion for Badgers: One of Britain’s Youngest Wildlife Watchers Goes Wild Nearby